|  No Comments
On Thursday, December 2, 2010 Carter & Cavero in Princeton kicked off the demonstration tour with renowned potter Tito.  During the four day long tour, were he visited all Carter & Cavero stores in New Jersey, Tito was a hit with all who came to see him.  Customers were instantly attracted to his talented and humble nature, as Tito spontaneously created miniature pieces of his work.  Fans were eager to purchase his work and to have him sign each piece with the unmistakable Tito signature.
On a recent interview with last week’s TIMEOFF section of the Princeton Packet publication, Tito talks about his experience as a descendant of seven generations of potters in his family.

RENOWNED Spanish potter Juan Pablo Martínez (aka Tito), grandson of one of the most popular pottery artisans in 20th century Spain, will give a demonstration at Carter & Cavero Old World Olive Oil Company in Princeton Dec. 2 and 4. Using clay and a potter’s wheel, he will show the ancient techniques that have made his pottery world famous.
Tito’s pottery, offered exclusively in the United States at Carter & Cavero, is fashioned in the shapes of antique vessels in a wide range of colored glazes, most notably the rich hallmark green of the Úbeda region, located in Andalucía, Spain. Tito recently spoke about his artform with TIMEOFF:
TO: What will you demonstrate for customers at Carter & Cavero?
Tito: I would like to show our visitors how the potter’s wheel works and that the techniques we use are the same ones used 2,000 years ago. We try to get the pleasure of producing a new piece along with the educational task of teaching the history of our work.
TO: What kinds of pieces can customers purchase at Carter & Cavero?
Tito: Most of the pieces are to decorate the house or the kitchen; they are traditional pieces with 1,000-year-old designs. In the past, these pieces were used to contain oil or wine and to preserve food over the year. However it is not a “mummified” production — we receive orders from 21st century customers, adapted to the necessities of this great country.
TO: What special techniques do you use in your work?
Tito: They are techniques that have survived the different civilizations of our country, from the Neolithic, the Roman Empire, the Middle Ages, the Renaissance… each period left different styles and techniques. The quality of the pieces turned is extraordinary. You can find a wide variety of colors and finishing touches, which lets us work with different forms of expression.
TO: Where do you sell your pieces?
Tito: We sell most of our pieces in our in-house workshop. Úbeda gets a great deal of tourism from central Europe and North America. Our pieces are in great demand with these two groups, especially. We export only about 15 to 20 percent of our production with Carter & Cavero in the United States, Japan and other countries.
TO: How many pieces do you typically make a week at your workshop?
Tito: We try to produce just the right amount to ensure a good quality and we dedicate sufficient time to the decorating process. We cannot quantify it — there are pieces that can take a week to 10 weeks to create, and there are other pieces that we can produce 100 of them during the same amount of time.
TO: What is your earliest or fondest memory of watching your grandfather and father creating pottery?
Tito: From my grandfather, his tenderness with which he told us about his hard childhood, working, extracting clay from the quarry barefoot and in some labor conditions that we would find horrific nowadays. Despite everything, he could assimilate those origins without a bitter feeling and love his job until the end of his life. From my father, the humility with which he taught us how to admire the work of other potters from the past, his respect for the greatest professionals in pottery and his hard discipline for making us learn from these potters. I admire my father, who is 71 years old, because he still has the same strong desire for learning and practicing as when he started working.
TO: Can you describe the region of Úbeda?
Tito: Úbeda is a city that was founded in the beginning of human settlement that remained uninterrupted for about 6,000 years before Christ, making it one of the oldest cities in Europe. There are architectural remains from almost every era, but what has made Úbeda most famous and what has made it a UNESCO World Heritage Site since 2003 is the presence of Renaissance buildings of a quality similar to those seen in Florence and Siena. It’s also a city that is very attached to the olive oil production and trade.
TO: Have people in your region regretted giving up their craft to instead use plastics and inexpensive glassware for their households?
Tito: Yes, in all of Spain almost all workshops disappeared in the 20th century during the ‘60s, once new materials and new customs came about. Only potters that are very dedicated and entrepreneurial like my father have survived in this profession. However there were many years of uncertainty, and it was very hard for many people who stayed with this profession. Fortunately time has recompensed those efforts. 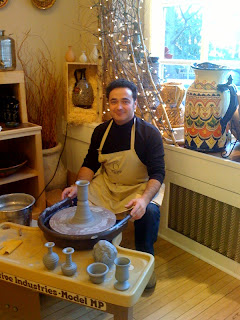 Tito received some well-deserved national press in his home land of Spain recently on his visit to the U.S.  Check out this Spanish TV network’s “Video of the Day”.
http://www.youtube.com/watch?v=KDxXjyzowbY&feature=youtube_gdata_player
You can visit Carter & Cavero Old World Olive Oil Company at their stores in Red Bank, Pier Village/Long Branch and Palmer Square/Princeton, New Jersey or you can shop online at www.carterandcavero.com. Carter & Cavero is now at the Holiday Shops at Bryant Park in New York City for the holiday season until January 2, 2011. 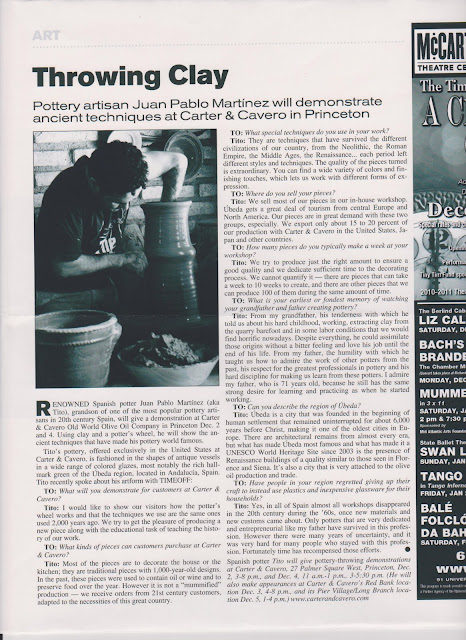 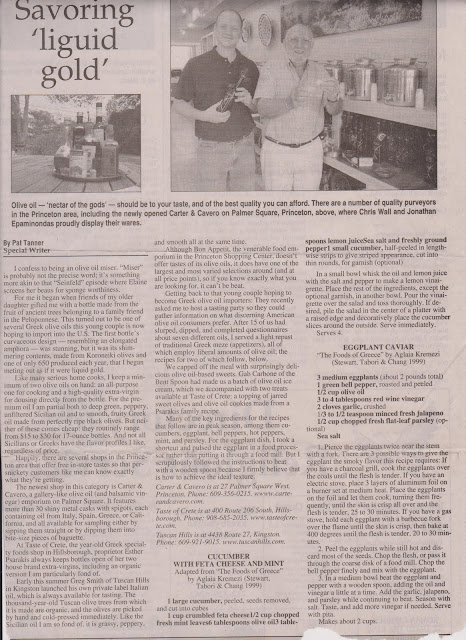 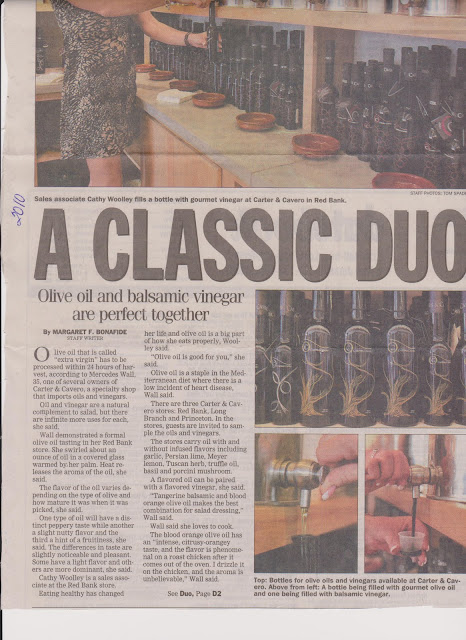 Olive Oil and Your Skin